The coming elections as this blog had warned years ago is not going to fix the destruction B. Hussein Obama has inflicted upon America and her allies.

The chessboard is a region of exploiting weakness to one's advantage. The advantage in all of this was put into play by the European cartel financiers as they have a purpose to rule the world again from a European empire with Jerusalem as the capital...

Send for your free copy of this booklet: The United States and Great Britain in Prophecy

Watch this on TV: Seven Steps to Destruction
Posted by orionjri at 3:33 PM No comments:

Labels: US in prophecy, What's ahead for the US 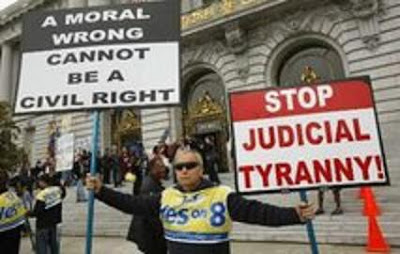 Posted by orionjri at 3:11 PM No comments:

A Foretaste of What's to Come?

1. Fined £150million for failing to fly the EU flag: Now British firms are told how to fight back 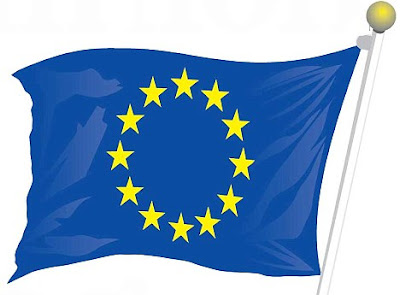 Companies receiving European grants must display the EU flag logo on their buildings, posters and websites or face being forced to pay back funding.

The new European Union ambassador to Washington has suggested that he will speak for Britain on foreign and security policy in America... 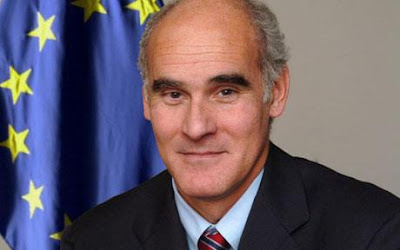 Joao Vale de Almeida was this week formally installed as the EU's ambassador to the US, and suggested that American officials should regard him as their first point of contact for transatlantic discussions...

The new ambassador claimed to now be 'leading the show' among European representatives in Washington. The prospect of an EU official speaking for the UK to its most important ally has angered eurosceptics, who said it shows Britain's waning influence...

Mr Vale de Almeida has stressed to Washington officials and politicians that under the EU's' Lisbon Treaty, he has more power than his predecessors. 'I'm the first new type of ambassador for the European Union anywhere in the world,' he said. 'I'm supposed to have a wider mandate than my predecessors.' Mr Vale de Almeida said: 'Our delegations now cover a wide spectrum of issues well beyond the economic dimension, trade dimension and regulatory dimension, to cover all policies in the union, including foreign policy and security policy...

For Biblical perspective, send for your free booklets:

Labels: The Beast of Revelation

How does anybody go about convincing an entire nation to turn away from all that they know to be true, Godly, and for the general health and welfare of a cohesive society?

...why would there be so much confusion across this country and their not standing against homosexuality?

Read Entire Commentary"
Posted by orionjri at 9:17 AM No comments:

The Internet is a large-scale version of the 'Committees of Correspondence' that led to the first American Revolution - and with Washington's failings now so obvious and awful, it may lead to another.

People are asking, 'Is the government doing us more harm than good? Should we change what it does and the way it does it?'

Pruning the power of government begins with the imperial presidency.

Too many overreaching laws give the president too much discretion to make too many open-ended rules controlling too many aspects of our lives. There's no end to the harm an out-of-control president can do.

Bill Clinton lowered the culture, moral tone and strength of the nation - and left America vulnerable to attack. When it came, George W. Bush stood up for America, albeit sometimes clumsily.

Barack Obama, however, has pulled off the ultimate switcheroo: He's diminishing America from within - so far, successfully.

He may soon bankrupt us and replace our big merit-based capitalist economy with a small government-directed one of his own design.

He is undermining our constitutional traditions: The rule of law and our Anglo-Saxon concepts of private property hang in the balance. Obama may be the most "consequential" president ever.

The Wall Street Journal's steadfast Dorothy Rabinowitz wrote that Barack Obama is "an alien in the White House."Full Text . . . ."

and: The case for impeachment: Obama's socialist takeover must be stopped

Send for your free copy of the booklet: The United States and Great Britain in Prophecy

Labels: Manasseh What Lies Ahead, Obama a Tool in Fulfillment of Prophecy on America, USA and Britain in prophesied decline
Newer Posts Older Posts Home
Subscribe to: Posts (Atom)