The sexualization of childhood continues

Excerpt:
Ed Morrissey wonders, 'Is it possible to be both disgusted and jaded at the same time?' Oh yes, certainly. I do it all the time. What inspired his question is the advent of 'push-up' bikinis for little girls who have nothing to push up. I'm not surprised, either, but some very uncivil thoughts, involving images of large kettles of boiling oil, pass through my mind when I think of the people responsible for the sexualization of children.

But they wouldn't be selling it if parents weren't buying it.

Along those lines, Jennifer Moses asks, "Why Do We Let Them Dress Like That?"

Posted by orionjri at 2:04 PM No comments:

Strategist: Obama handling of Libya polarizes NATO, pushes Turkey into anti-U.S. camp
By Gregory R. Copley, Editor, Global Information System
Excerpt:
The U.S. Obama Administration’s lack of leadership in helping to resolve the Libyan civil war has, among other things, widened the rift between the U.S. and European members of the North Atlantic Treaty Organization (NATO), and has made the U.S. increasingly less influential in global strategic issues.
The confused and reluctant approach of the Obama White House has also clearly exacerbated the rift — which official Washington chooses not to see — between Turkey and the U.S., and has hastened the move of Turkey into a strategic camp which is hostile to the U.S. The Obama approach — ... — reflected President Obama’s belief that he must be clear of foreign military operations to successfully win a second term in the White House.
However, it also reflected the very real knowledge that he and many of his friends and associates have been compromised by funds which had been made available to them by Gadhafi in recent years. This is now an open secret in Washington policy circles...
Meanwhile, the U.S. withdrew on March 25 from its temporary operational leadership of the 12-country coalition — which includes Belgium, Canada, Denmark, Italy, Norway, Qatar, Spain, Turkey and the United Arab Emirates — and allowed NATO as an organization to assume coordination (on March 26) of the “no-fly zone”...
Full Commentary
For Biblical Perspective send for your copy of this booklet: "The United States and Great Britain in Prophecy"
Posted by orionjri at 3:55 PM No comments:

Labels: Obama a Tool in Fulfillment of Prophecy, Obama and Libya, US in prophecy 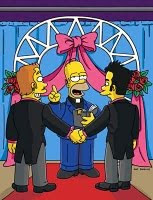 A news item by Agence Press France flew under the radar of many American news media. On February 25th it reported that “The White House on Friday named Jeremy Bernard to serve as social secretary to President Barack Obama and his wife Michelle Obama, the first male and first openly gay person to hold the position.”

Barack Obama, married and father of two girls, may be straight, but he has proven to be the most active President when it comes to efforts that would establish homosexuality as a “normal” lifestyle in America. He is not alone in this; it is the goal of the gay, lesbian, bisexual and transgender movement (GLBT) in America.

While I fully expect to evoke howls from the GLBT movement in saying this, the fact remains that no where in nature is homosexuality the norm. It is always an aberration because heterosexuality ensures the propagation of any and all species. It is abnormal for members of the same sex to prefer one another. The recognition of this fact reaches back to the origins of humanity.

...Granting homosexuals the right to marry is an act of societal suicide...


Check out what the Bible says about it.
The Plain Truth About Homosexuality

Posted by orionjri at 9:48 PM No comments: