Expose: The Vatican Wants to Lay its Hands on Jerusalem

“Peace negotiations in the Middle East must tackle the issue of the status of the holy sites of Jerusalem”, Cardinal Jean-Louis Tauran, head of the Vatican’s Council for Interreligious Dialogue, declared several days ago in Rome.

The Vatican’s former foreign minister asked to place some Israeli holy places under Vatican authority, alluding to the Cenacle on Mount Zion and the garden of Gethsemane at the foot of the Mount of Olives in Jerusalem.

The first site also houses what is referred to as King David’s tomb.

“There will not be peace if the question of the holy sites is not adequately resolved”, Tauran said...

Danny Ayalon, Israel’s deputy foreign minister, declared that Israel might consider giving the Vatican “a greater role” in operating the sites. In the last weeks, the Roman Catholic Church’s authorities increased their political initiatives for Catholic control over some sites in Jerusalem.

The Vatican’s former arcibishop in Jerusalem, Michel Sabbah, just promoted an appeal to the European Union and United States to “stop the Hebraization of Jerusalem... 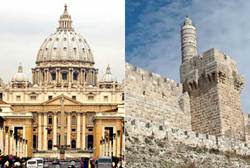 For biblical perspective, get your free copy of the booklet: Revelation: The Mystery Unveiled
Posted by C C ramirez at 7:13 PM No comments:

Labels: Beast, Pope and Jerusalem, The Beast of Revelation?, The False Prophet, the Vatican and the Middle East, thePope in Rome
Newer Posts Older Posts Home
Subscribe to: Posts (Atom)