And the sea turned to blood…

“Then the second angel poured out his bowl on the sea, and it became blood as of a dead man; and every living creature in the sea died.” This is what the Apostle John saw in vision and recorded in Revelation 16:3. Many have noted the eerie sight of the recent oil spill in the Gulf of Mexico appearing as blood upon the sea. Now another oil spill, this time in Dalian, China.

Has the second angel poured out the bowl of the wrath of God?" 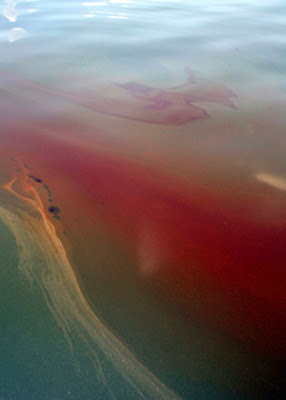 "Don’t let what is coming catch you by surprise. To understand the future of the world and how it will impact your life, be sure to read our free booklet, Revelation: The Mystery Unveiled!

Read MORE
Posted by orionjri at 5:22 PM No comments:

Excerpt:
This week's meeting between President Obama and British Prime Minister David Cameron could kill off the US-UK 'special relationship' if Obama continues to indulge his anti-British prejudices.

Obama's anti-British views may go back to his childhood. His grandfather -- Hussein Onyango Obama -- was involved in the 1952 Mau Mau Uprising against the British in Kenya. He was caught and sentenced to six months in a brutal high security prison...

Since Obama's inauguration however, it has been clear that ...Obama is deeply anti-British and is quite willing to show it.

It started with the infamous case of the Churchill bust...Obama returned the bust the minute he stepped into the Oval office. The symbolism was obvious -- Obama's America does not need Britain anymore...

Yet since then the air has turned even sourer. It didn't take a genius to realise that Obama would cool down the relationship with the British -- he is a huge fan of the European Union, and that was clearly where he would place his emphasis in diplomatic relations. Yet, his administration has gone from typically childish snubs -- such as Michelle Obama condescendingly treating our Monarch like a cute little old lady -- to outright hostility.

Nile Gardiner notes that there has been at least ten major anti-British incidents since Obama took office. In addition to the President not once referring to the 'Special Relationship' in his speeches, failing to acknowledge British sacrifice in Afghanistan, and consistently refusing
to meet with the Prime Minister, Obama's administration has refused to acknowledge British sovereignty of the Falkland Islands (where 258 British soldiers died defending it in 1982), mocked the British press, and undermined British influence in NATO by apologizing to France. To top this barrage of insults off, Obama's State Department responded to criticism that the President was ignoring Britain, by describing the President as 'overwhelmed' and reminding
the British,

There's nothing special about Britain. You're just the same as the other 190
countries in the world. You shouldn't expect special treatment.

At the moment, these childish attacks by the Obama administration are just hurting the British. Yet it could also hurt the American public...

What started off as petty snubs from a petulant President has rapidly turned into a diplomatic crisis.

If Obama does not play ball with Cameron this week, and refuses to back down from his anti-British agenda, America's ability to defend itself from terrorist attacks may be weakened and its future ability to win wars may be damaged. In short, Obama's deep-rooted prejudices may cost American lives.


Read More
Posted by orionjri at 5:05 PM No comments:

What America has Become 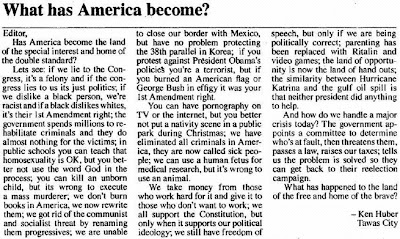 What America Has Become
Just Americans Making Ethical Statements Weblog «
Free booklet: "The United States and Great Britain in Prophecy"
Posted by orionjri at 10:01 AM No comments:

Barack Obama and His Glory Days Are Past

Excerpt:
Americans are not quitters. Barack Obama and all of his thugs shall be ousted from the seat of government, because there is a meeting underfoot somewhere which will be sure to put them out of office...

In many corners of this nation and of the world, also, America’s darling child, Obama, has already worn down his phony welcoming smile and rambunctious swagger. The world has had a chance to take a good long hard look at our man in the White House and many do not much like what they see looking back...

After a mere—fully—a mere short time in office, Obama has found out how necessary it is for him to have had the right experience for such a huge responsibility...

Never in all my years have I witnessed such a blatant attack by any President of the United States of America to come down on the American people themselves. It is as if voters had brought in an outsider and handed him the reins while they tried to settle on a real candidate. And, that is just what has been done. That is, by those who had fallen for his spiel...

Democrats have changed our language and many Republicans and Independents in the church and out on the street corners have joined in to cheer them on. Democrats now speak of
... “morals” as being the right of a woman to murder babies in the womb,
....and they also encourage people to rush to bury the sick and elderly in an early tomb.
....They do not hesitate to call truth a lie and a lie their truth. They do not hesitate to call wrong right and right wrong. .
...In the same vein, they do not honor the physical differences that separate a male from a female person and a boy from a girl. In their mad rush to destroy America, they spew their ungodly perverse lifestyles in the pathways of our children’s young minds and teach them that whatever they want to do is perfectly all right because there are no boundaries and there is no accountability to anybody but to themselves.
...And then they legislate their filth into law, as if that makes it all right.

But it is not all right and anybody with an ounce of character, faith in God, and a little knowledge and wisdom ought not be ashamed or afraid to say we will not be deterred from God’s way.

If this is America, then we need to apologize to our forefathers and ancestors for what she has become. ..

Read the entire Editorial
Posted by C C ramirez at 8:55 AM No comments:

According to the British paper Daily Mail, “Prime Minister David Cameron will give his backing to an openly gay cleric who wants to become a bishop in a move that could threaten to split the Church of England.

Dr Jeffrey John, the Dean of St Albans, is on the shortlist to be the next Bishop of Southwark. But his candidacy could spark a civil war between the liberal and conservative wings of the Church of England.” African archbishops who are more conservative predict that this move by Cameron could tear apart the Anglican Church. Once Mr. Cameron supports Dr. John, the Queen will then be required to approve him (Mail Online, July 4, 2010).

Long ago, God prophesied against Israel, “You have wearied the LORD with your words… In that you say, ‘Everyone who does evil is good in the sight of the LORD, and He delights in them’” (Malachi 2:17). Mr. Cameron is just one of many leaders of Israelite-descended nations who have joined the ground-swell of opinion in support of making national leaders out of what God clearly calls sinners.

It is sad to realize that our actions as nations truly “weary” the great God of Heaven. God speed the day when the righteous will rule and our national actions will once again bring joy to our Father in Heaven.""

Watch this: Tomorrow's World - Magazine and Television program-"Christian Babylon
Posted by orionjri at 3:30 PM No comments:

Excerpt:
The White House agreed to requests worth $500 million by Egypt, Oman and Tunisia for air defense upgrade, aircraft and naval ship support as well as helicopters.

The Pentagon announcements of the Arab requests, which require approval by Congress, came hours after the White House said Obama would press for the extension of Israel's freeze on Jewish construction in the West Bank and most of Jerusalem...

White House aides said Obama would meet Netanyahu on July 6 amid enhanced Israeli-U.S. cooperation in intelligence, missile defense and security. The administration has not approved an Israeli request for offensive military platforms since Obama took office in January 2009.

Instead, the White House endorsed nearly $13 billion worth of Arab arms requests last year, and nearly $10 billion from Turkey.

Currently, the administration has been examining a request from Saudi Arabia for the sale of 75 F-15 fighter-jets as well as the modernization of scores of other aircraft. Officials said the deal was worth more than $10 billion and approved during the visit to Washington by Saudi King Abdullah in late June...

Ask for your copy of: "The Middle East in Prophecy"
Posted by orionjri at 12:06 PM No comments:

The Good Life in Hard Times

God has given the American and British-descended nations great blessings over the years. But now, as those blessings are dwindling, what can be done? The good news is that God shows His people how to live by His Way, and to have tremendous blessings individually even in times of national crisis...

There are hard times coming. Bible prophecy shows that we are only at the beginning. Now is the time to get your financial house in order, and decide what you will really want. Money? Possessions? An endless cycle of acquiring and consuming?

Or will you let the Great Recession drive you to your knees to forge a new and profound relationship with your Maker?...

A Century of Blessings...

Full Article
and
How Could I Possibly Know?