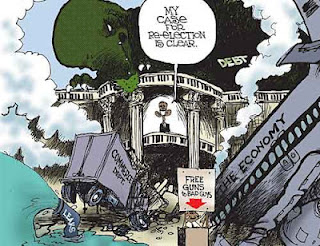 We both know the guy is a an imposter, a ‘Manchurian Candidate,’ and he’s there to do a job, implement a very specific agenda. And he’s not planning to leave until that job is done, the agenda completed,” stated my source. “It’s no accident, his lack of history, lack of bona fides. It’s all about his lack of allegiance to our country and the Constitution that ‘43’ called just a ‘G-d damned piece of paper. And Bush was an American President, at least on paper. Where does Obama call home?” Where does his allegiance lie? That’s what the eligibility brouhaha is all about and why it’s so important, but hardly ‘anybody gets it.’ When he said he was a citizen of the world, those were not just words, but an admission of sorts. And fundamental change and transformation, that’s what it’s all about.”...

...my source stated that the current resident of the White House has been tasked to implement a “robust agenda of change” using the agencies and government infrastructure previously created for him.
“He’s been instructed to fully remove ‘God, guns and guts’ from America and Americans, to neuter our military, bankrupt our country, and force everyone into dependency through a well-planned economic disaster that was crafted long before he stepped foot into the Oval Office. The financial crash of September 2008 was one such well planned economic terrorist attack. It had the blessing of many bankers and politicians in the U.S. and now I’m finding, some overseas. It was an important part of the framework given to Obama to ‘grease the wheels’ for a complete financial collapse. ..
The objective, or the agenda, is much bigger than I think anyone can comprehend,” stated my source. “It’s global in nature, and it involves other governments, communist governments,” he added. It’s evil in its simplicity. It’s to destroy our country from within and take away our ability to fight what’s coming. It’s to change our way of life, and he’s got the people in place to do it, at least for the most part. ..

...“I’ve been told that the people with the real power are using the guy in the White House to implement the whole globalist power structure thing. They made certain that they had someone in the White House to go along and implement certain things by executive order, appointments, and other methods to bring about the deconstruction of the U.S., and making our Constitution irrelevant, or at least subservient to international law...
FULL STORY: -
Posted by orionjri at 10:19 PM